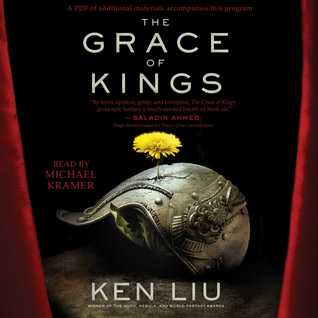 The Grace of Kings
By Ken Liu

I have spent more than a year and a half listening to this audiobook here and there, mostly while doing yard work. It feels pretty weird to be done with it, now I can only hope that Wall of Storm will be as good. I haven't read much fantasy in my life so I'm not sure how par-for-the-course this book is. I found the constantly shifting political struggles of this vast world of warring states to be a very intriguing and exciting subject matter. These dynamics were so fun to follow especially since these macro geopolitical scenarios were always accompanied by characters on the ground that we could follow and see how the people who inhabited this world were experiencing everything. To my taste this book perfectly balanced these zoomed in and zoomed out portions of the story. One thing that makes these sociopolitical situations even more interesting is that each of the warring states has a patron god and we semi-frequently check in on the realm of the gods to see how they're interpreting everything that's happening in the mortal world. We occasionally even get to see them exert small acts of influence on the mortal world. This is handled pretty modestly so it never feels like the gods break the tension or appeal of the story. This is also the case with the magical elements contained in the story. This book, while mainly being grounded in a realistic world does have some light magical elements and almost steam-punky sci-fi elements but it never goes over board with these elements. This is once again a perfect balance on the part of Ken Liu as leaning too much into these elements could have really deflated the decisions of these characters and the tensions of their struggles and situations. Likewise if these elements hadn't been present at all the book would have lost a bit of its whimsy.

The characters in this book are well suited for the story, the scale of the setting requires a large cast of characters and unfortunately often these characters can feel a bit same-samey. Overall I love most of the characters in the book but they do all pull from a small pool of traits like ambition, wisdom/philosophy, calculating/tactfulness, honor-driven. Most of the characters we follow are big movers and shakers within this universe so some of these qualities are essentially requirements for their ascension and the universe also seems to be deeply invested in its own mythology, proverbs and history so most of these qualities -while being very persistent in the characters- never seem over-the-top or out of place. Unlike in the book Dune where every character has the same traits and it feels like bad writing this books characters all share traits that seem like a natural homogeneity within their culture and social roles.

This book likes to focus on moments of its characters sharing philosophy. I really love the way Ken Liu uses allegory to give moral and philosophical lessons and how they influence or explain the decisions that characters make within the story, it's such a great device that not only feels good as a reader but also pulls you deeper into this world. This would be a good time to mention setting. I found this fantasy version of ancient China much more interesting than the tired ancient European fantasy setting. Some of the elements that benefited from the setting were the herbalism, the Confuscian/Lao-Tzu types of philosophies, the Sun-Tzu-esque discussions of battle tactics. Drawing from Eastern influences made such a great foundation for an interesting fantasy and political story.

This was such a great book that explored so many ideas and situations for all of its world and characters and did so with such grace and precision, I can't imagine this book being executed any better than it was and I'll be truly amazed if he's able to pull it off again in the next one.

ON THE NARRATOR: This was one of the best narrated audiobooks I've ever listened to. There were very few times I had a voice take me out of the story and it was always with a child or woman crying out, which male narrators can never pull off well. I especially loved the voice of Mata, it seemed to perfectly capture the character and I would be interested to hear whether Ken Liu agrees.