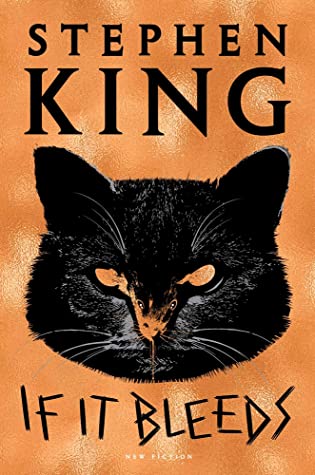 If It Bleeds
By Stephen King

A really solid collection of Stephen King novellas. I think short form writing is where Stephen King really shines and his novellas allow a bit more time for his stories to get off the ground. None of these stories really has the opportunity to overstay their welcome and yet each leaves you feeling satisfied, like a perfectly portioned meal. All of these stories have the common element of starting as something simple and easy to digest which helps you get quickly and comfortably introduced to the characters and settings and then once you're acclimated to the stories they start to go off the rails. This structure -whether purposeful or not- made the stories very digestible where they could have otherwise been very disorienting. Overall this was a really great collection and Stephen King remains Stephen King. For the most part -excluding the last story- these stories aren't horror stories. They all have some sort of horror element but if you're looking for straight horror, don't get it twisted, this isn't it. My overall opinion of this collection is that it was a joy to read with elements of horror, suspense, metaphysical sci-fi and slice-of-life Americana. This is where I will review each individual story, usually I try to leave my reviews free of spoilers but the nature of these stories -how they have sudden exciting, unpredictable shifts partway through- makes that pretty tough so this is my spoiler warning for the rest of my review:

-Mr Harrigan's Phone was a pretty strange but very enjoyable story. It has the overall feeling of a looking back, coming of age story like the Sandlot or Forrest Gump but ends up turning into a Goosebumps/Twilight Zone story. The only thing about this story that was a bit off-putting was that its protagonist was someone who was a kid in the mid 2000s and had the first model of iPhone. Even if I didn't know Stephen King wrote this story, it's pretty obvious the author was over the hill in how he writes this character. This was otherwise a well written story, the best two adjectives I can think of to describe it are charming and spooky.

-The Life of Chuck was an absolute trip, it was funny and metaphysical and beautiful and melancholy. I can't otherwise describe it, just read it. Charles Krantz, 39 great years. Thanks Chuck!

-If It Bleeds was a fun thrill ride of mystery and suspense, however it was the only story here which overstayed its welcome. The beginning was fantastic but the story sagged a bit in the middle for me and became a bit of a chore, luckily it picked up and the end was really fun and exciting like a demonic, crime drama Home Alone. I was a little put off by how he wrote one of his young black characters to say "he's so jive". I don't think it was in bad taste, just tone deaf and another Turing test to show the reader the author is over the hill.

-The Rat was probably my favorite story of the bunch, it was the one that just sped by for me. I got so invested in the characters, the situations and the setting. Everything about this story just seemed to be right up my alley and I think he just nailed it with this story -the same way he did with A Good Marriage- where he just found everything that needed to be said in this story and didn't write the slightest bit more than that.