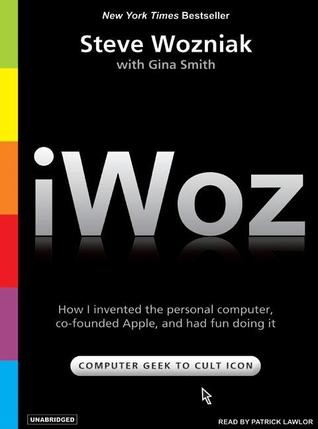 I'm not sure Steve Wozniak could have done a better job at writing an autobiography. It turned out to be everything I had hoped for when I downloaded this audiobook. From his early life, he picks out all the most interesting moments and the moments that would become most relevant in leading to his legendary engineering career. He goes into satisfactory detail in the most salient portion of the book: the development of the Apple I and II computers. He often goes too deep into technical details for the non-technical reader, but this is a blessing and one of the great highlights for the technically inclined. I had feared that once we got into the Apple IPO that things would become uninteresting to me but I found myself still fairly invested.

From the wild west days of early silicon valley many legends have sprung up, spun around, and settled into their final forms. These stories are often exaggerated, contested by involved parties, or entirely fabricated. Woz gets space to set the record straight all throughout this book and it's extremely nice to hear his perspective on some of these legends we've all heard (those of us plugged into the history of the valley, that is).

On the audiobook: The narrator (Patrick Lawlor) must have really studied some Woz interviews because he just nails the delivery of the lines in this book. He really understands the tone that Woz must have intended when writing this book and I really appreciated that. I did notice the first speako (like a typo but for narration) I've ever heard in an audiobook though, which was a fun little thing to catch. The speako was regarding a FORTRAN compiler which the narrator referred to as a "complier". Love it.