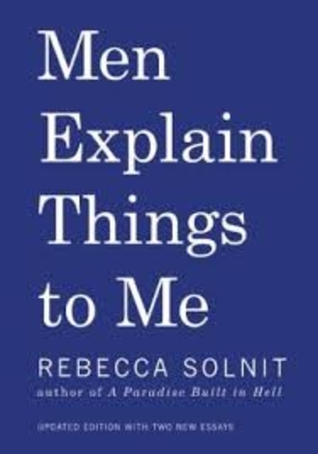 Men Explain Things To Me (2014 Edition)
By Rebecca Solnit

This book was almost perfect and I hesitate to only give it 4 stars, let's call it four and a half. Solnit has compiled an anthology of 9 articles she has written that relate to feminism. They are generally trying to tie certain commonly excused or overlooked behaviors to underlying problems in our culture. I've been in search of good feminist texts lately because I'm really trying to understand where I stand when it comes to feminism but it requires a lot of learning first. This book proved to be an extremely valuable resource for me as I've found it really hard to find just broad entry level examinations of some of the issues feminists are concerned about. This book covers a huge spectrum of feminist issues from mansplaining to sexual violence. This book, if nothing else, can hopefully provide an eye opening explanation of rape culture to anyone who is confused or uneducated on the subject. The only real complaints I have about this book are not issues that were caused by poor executions but rather by what the book is. Being that it's a collection of essays it doesn't really have a unified feeling. The essays were written over a 6 year period most of them before she knew they would be compiled into a book so there is a bit of repetition of data, arguments and assertions. This isn't too common and you can see how the information was an important inclusion in each individual article in a vacuum but it is a bit tiresome rereading info over the course of this book. The other issue for me is just that a few of the premises that surround the articles (however well written and full of exactly the kind of information I was hoping to get) are not premises that feel very relevant to the defining themes of the book. Overall these articles as individual pieces are largely ones that should be shared with anyone and everyone. These articles are all full of very relevant information for people living in every country of any gender. The book is probably the most efficient way to read all of these articles so if you can find it easily you should pick it up. I plan to continue following Rebecca Solnit's writing a la carte in the future.