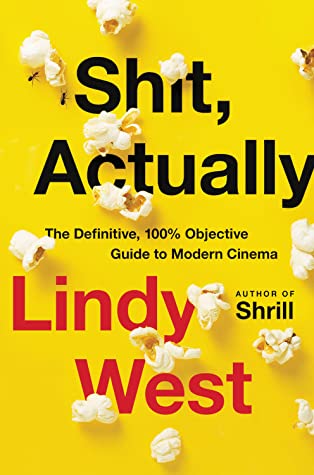 If a sequel to this were to be published I would certainly read it. I think so highly of it, not necessarily for the content but because of the overall experience. I went into this book by watching/re-watching the majority of the movies that are featured in this book and it was such a fun multi-media experience. It's like a curated movie club with discussion to follow hosted by a fantastic hostess, Lindy West. Overall I agreed with most of her assessments/hot-takes. In a few cases I think she could have been a bit more fleshed out and detailed with her criticisms. Love Actually is one example, but I understand her brevity as dwelling on that movie's endless flaws has nearly overtaken my every thought since watching it, and has probably impacted my mental health for the worse. I found myself going into each chapter having a wish-list of things that she would have noticed too, when they showed up in her review it was always a great feeling. A prime example being the mine carts in The Rock, Who made that artistic decision?! A few times I found myself trying to explain to the book that it didn't understand a scene it was criticizing. I talked to this book a lot. It was very engaging, which is a plus during Corona times when we have to develop parasocial relationships with books.