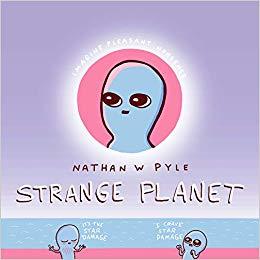 Holding these dead tree fragments in my hands and looking at them caused multiple contractions in my diaphragm. It's a pretty simple concept and not altogether original, people are weird when you think about it. Most of the execution and observations probably aren't the best that anyone could conceive of using this formula but overall the execution is good enough and the concept works so well as a springboard for ideas that it resulted in a very fun book to read. I'm sure this cartoonist could go on like this forever and milk this concept for years without it getting stale. As I said it isn't all that original, we've heard jokes like this a million times but as my mom would tell me "Sure every Blues song sounds the same, but it's a damn good song."