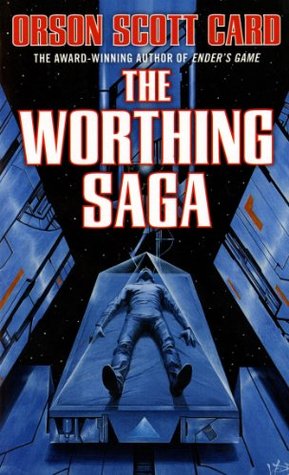 This is probably my current favorite book. It's an amazing science fiction epic that spans centuries. One of the main themes is the taoist philosophy that happiness cannot exist without the contrast of pain. The story is almost biblical and Orson Scott Card drew inspiration from the Book of Mormon. It tells the story of a ship that crash lands on a planet. The pilot, Worthing, is the only man who wasn't in suspended animation. Most of the people who were in stasis were unharmed but the computers that held their consciousness were destroyed leaving them as essentially adult babies. Worthing decides to wake them up two at a time and raise them until they are mentally developed enough for the next batch. He teaches them to farm and care for themselves. He entrusts them with waking the rest of the passengers and raising them as he had. He then goes into cryogenic stasis as well to check back on them every few decades, and then centuries as their civilization grows. The world that Card builds is extremely well fleshed out and fascinating. Any lover of sci-fi should read this book.