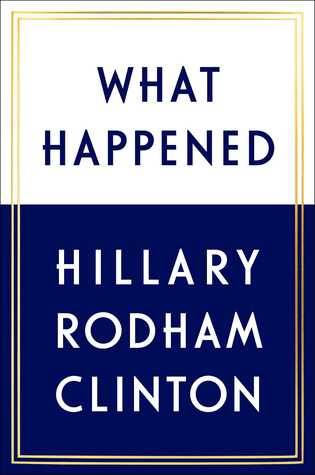 What Happened
By Hillary Rodham Clinton

What Happened is simultaneously an excellent first hand account of the 2016 U.S. Presidential election, a great window into the life and personality of one of the most influential women in World History, and a comprehensive argument for the role feminism will play in the coming decades. As far as the 2016 election is concerned: Clinton offers a fascinating perspective. She paints a picture of a frantic two year struggle to get her plans and platforms across to the American public amid two significant populist movements and a media climate that pushed her e-mail scandal to the front of the public's perception. It's really nice to be able to see how she feels about everything that happened without the stakes of the election looming over her. She does an excellent job of detailing the missteps of the media, FBI director Comey, and others that led to half of our country voting for an unqualified megalomaniac for President. At points in the book her recollections feel a bit revisionist, especially when she cherry picks quotes of herself at specific rallies and debates that were, to her, emblematic of certain messages and motifs her campaign was trying to present. Unfortunately to the public these emblematic moments were not necessarily the takeaways and this wasn't simply due to the overshadowing media climate and smear tactics used against her, it was often due to a lack of focus on these issues. She cites, for example, a focused push toward the end of her campaign aimed at Arkansas voters where she met with a few working class people in Arkansas, she wanted to be sure that the people in Arkansas and in America knew that she cared about working class Americans. Unfortunately it was too little too late to be considered part of her campaign by anyone in the country. It's a great bit to include in the book but she wasn't really taking the stories of these people and how she intended to help them on the road with her throughout the campaign, she tacked it on at the end of the campaign and now presents it as a main feature of her campaign from the start. She does acknowledge that she didn't do a great job of representing her positions on the campaign trail but seems to fail to see how. Regardless of the slight revisionism the accounts feel extremely honest and she really bares all. You get more than the nitty gritty campaign and election details too; fun little anecdotes from the campaign, the culture of her team, and reactions/encouragement/input from her friends and family. I don't know of anyone who's first hand account of this election I would value more and I don't think a better job could have been done by her at recounting and analyzing that bitter exciting time in American History.

At points in this book she digresses from the election details and focuses on personal anecdotes and philosophies regarding feminism, sexism, misogyny, and sources of female empowerment for her that can hopefully provide inspiration for others. These parts of the book are the most moving and are an essential part of this book. They cannot be split into one book about feminism and one which only covers the election. The reason these pieces are part of an inseparable whole is because, quoting Clinton herself, "sexism and misogyny played a role in the 2016 presidential election." This is a very important point that she can not dance around in this book, she could not have said it during the election for fear of alienating voters who don't acknowledge or fully understand the current climate of sexism in the U.S. but it is important for her to not allow that notion to hang in the air and remain unsaid now that the election is over. She is not a sore loser, she makes it clear in this book, she is not claiming this as a defense of herself but as an admission of truth, a hard truth that we as Americans need to acknowledge in order to heal and move forward. Not only is the role of sexism an inescapable topic when recalling the election, her feminine identity and personal history with sexism and misogyny are crucial elements in how she got through the tough race, got to a point in her life where she would run for president in the first place, and how she coped with losing the race and our nation being handed to Donald Trump. All of her writings in this book related to feminism and the female identity are invaluable works. A piece I found especially moving was the first section (after the introduction paragraph) of the chapter "On Being a Woman in Politics". This section is an inspired piece of prose that I hope will be handed down for generations as one of the great social and political pieces of our time. It's about finding the power in her personal narrative, something all too important in our politics. Her introspection on this subject amounts to a meaning that is so much greater than the sum of it's parts. It so perfectly captures our social revolutionary past, the rocky yet steady path of progress we walk currently, personal identity as an American who faces any barriers along the way, and so much more (all in the span of two and a half pages!).

Beyond feminism and the 2016 election this book is a personal connection with Hillary Clinton. She shares so much of her life, her emotions, her struggles and her successes. She invites us into her life and explores some of the hardest moments in her life and leaves you feeling inspired by it, that if one human can overcome so much and still shine so brightly there is surely still great hope for humanity's future.