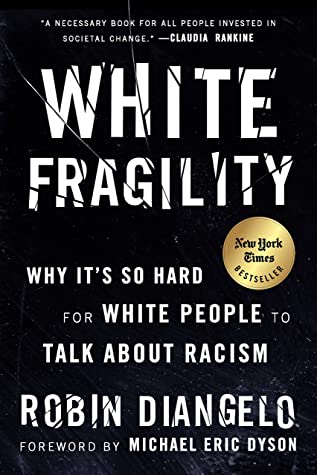 White Fragility is an idea that's well developed and explored in this book. DiAngelo does an excellent job of outlining the things that trigger white fragility in us and how we respond to those triggers. Robin DiAngelo seems to be the perfect person to talk about this subject. She has kept a running list over the years of the ways in which white people respond to having to acknowledge racism. As it turns out we're very predictable and we pretty much always give one or some of the same canned responses. As DiAngelo writes "I sometimes feel as though we are all reciting lines from a shared script. And on some level, we are, because we are actors in a shared culture." She thoroughly lists all of the responses and either dismantles them individually or categorizes them by their flaws and dismantles the category. The fact that she dismantles these defenses is crucial because white fragility is a self protecting condition and she needs you to have your defenses down if you're going to understand it.

I think in the case of this book her whiteness is an asset, because she knows that white folks are naturally defensive about these things she's able to relate and write from that perspective. She often gives examples of ways that her own racism was pointed out to her and how if she had let herself respond with white fragility she would have continued causing harm for others and have created a road block that prevents solutions from ever happening. It's a really effective way to write what's essentially a self help book that's diagnosing all of white America with this psychological disorder.

My only complaint with this book was that it repeats itself a bit too much. I think it was purposeful, to kind of firmly plant ideas in the reader's head but I thought it was unnecessary given how short the entire book is, we're not going to forget something from chapter to chapter. The lists of triggers and responses were a bit tedious but I think it was important to be thorough, if she had left any stone unturned then it would have left a wall up for many readers to not address their own defensiveness because white fragility is such a deep part of us.

This book is not about systemic racism. It's not even really about interpersonal racism. It's only about how white people usually respond when confronted about race and how we can better respond, and at that it is very effective. This book attempts to get us as white people to address our own inability to acknowledge and address racism. It's opening the door for us to be ready when conversations of systemic racism or our own personal behavior come our way. It's priming us to be ready to listen and not shut down when minorities advocate for themselves as individuals or as a group. The book does hint at a few bits of systemic and interpersonal racism and does attempt to define race as a social construct and debunk race realism a bit but only because it's necessary to understand race as a social construct if you're going to understand some of her other points. The bottom line is this book will not really teach you about racism, it will only give you the tools to be ready to start understanding racism. Read this for sure, even if you don't think you need to, but after you read it keep reading about racism while continuing to keep your own white fragility in check.