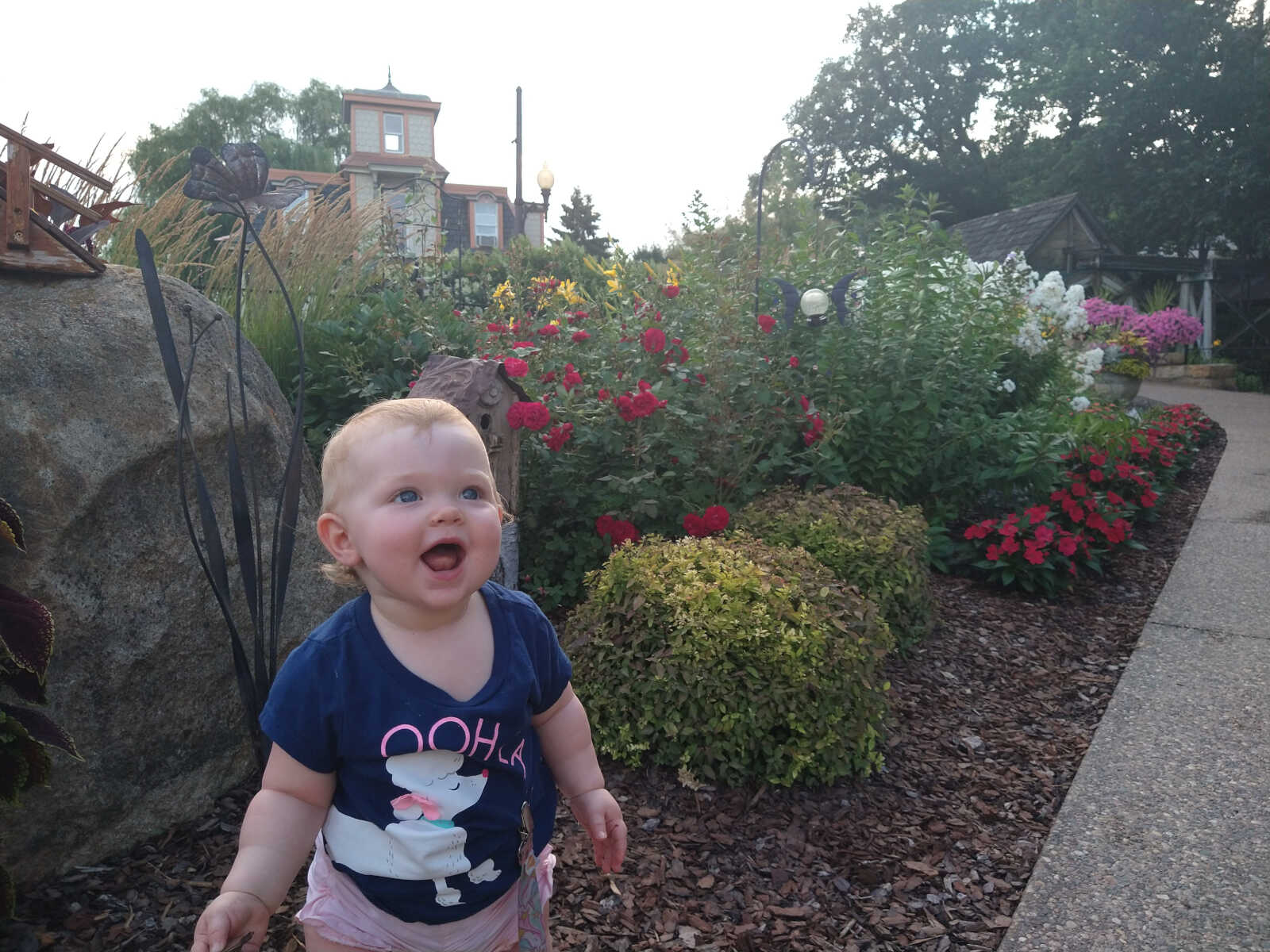 A Summer of Firsts

I’m a little late on this one, but this post will only cover what we did over the summer. As always here is a gallery of photos we took this season.

This summer was when things really started opening up again. The mask mandates were lifted in Minnesota, and the local governments in the Twin Cities quickly followed suit. With so many more opportunities for activity, this summer became one of rediscovery for us, and a summer of firsts for Maya.

Two days after my last blog post Maya took her first steps. Serendipitously, I was able to catch the event on video! Throughout the day Maya had been doing something new, going from standing to sitting without bracing herself on anything. I thought it was pretty cool (coolness is subjective), so I decided to record a video when I thought she was about to do it. Sure enough she stood up on her own. While she was standing she must have thought something along the lines of: “You know what? I bet walking’s not so tough!” As if inspired by the camera’s attention, she took a couple very solid steps before ultimately succumbing to gravity (don't we all). She’s been cruising around like crazy ever since!


Elena managed to have a pretty active summer too. We got a couple new bikes, since Elena and her friends are outgrowing the old ones. I finally tracked down replacement parts for our trampoline, which had been so viciously attacked by our neighbor’s tree last year. Evalyn spent a lot of the summer with us, joining Elena for a few day camp, tennis, and basketball programs. Elena was so happy to be back playing with other kids. She made lots of friends and came home every day bouncing off the walls. It was really nice to see her so ecstatic after the relatively isolated year she went through. This pandemic was a lot harder on her than on us. 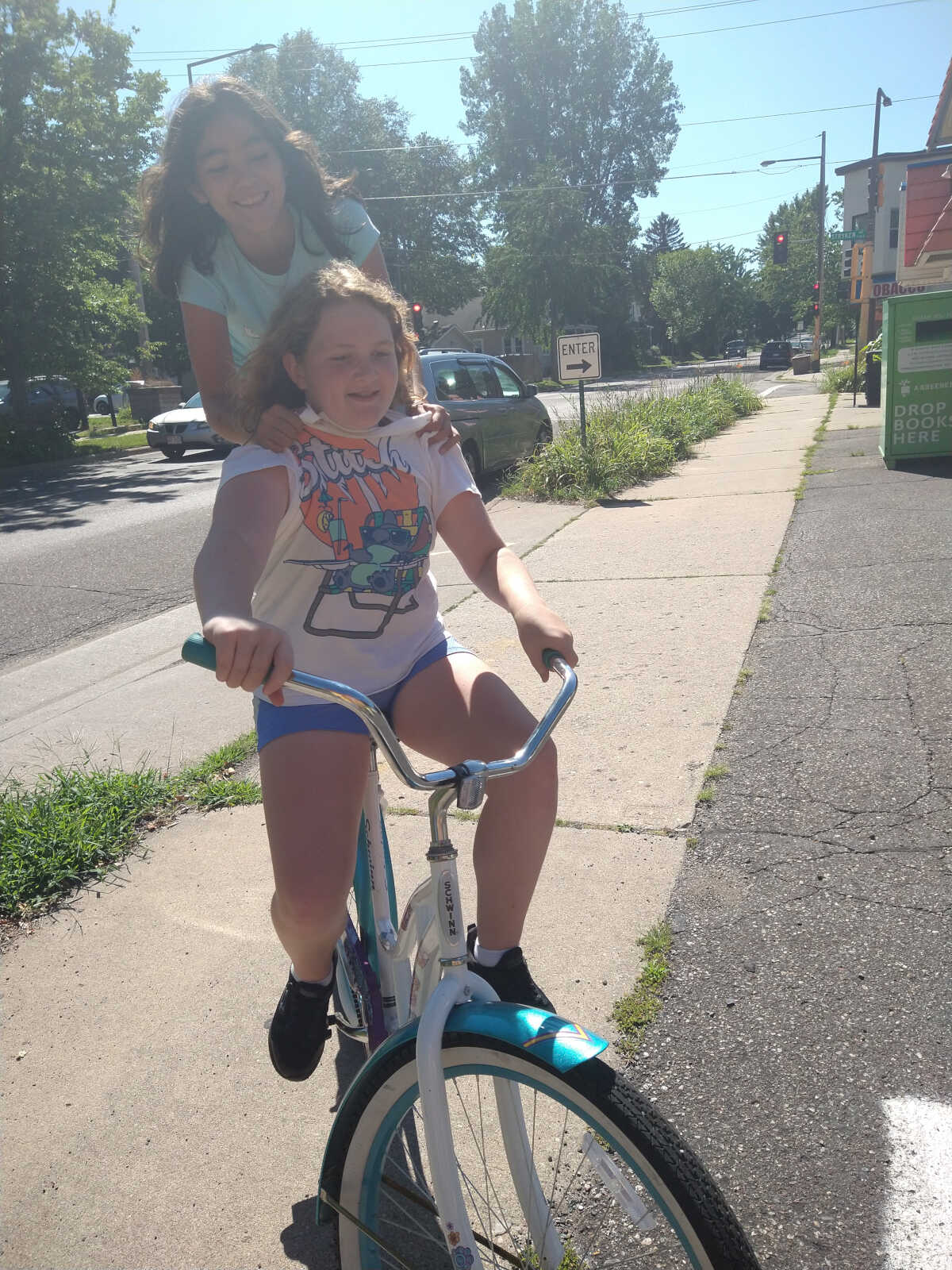 Elena and Evalyn riding the same bike to Icy Cup

A highlight for me was going to the Magic: The Gathering Forgotten Realms pre-release with my friend Henry. I also managed to get to a Friday Night Magic event before the summer was over. It’s so nice to be able to play Magic in stores, with people again. Another highlight of the summer was hosting couch surfers at the new house. It was so nice hosting folks again after a long hiatus. We met lots of cool people, and made some more good memories.

At the end of a very busy July, things just got busier. I went on a ballpark bus tour with my dad. When we returned it was time to start getting ready for Maya’s first big birthday bash! Thanks to everyone who could make it. We were glad so many people were able to meet Maya, and see the house. It was a really fun day! 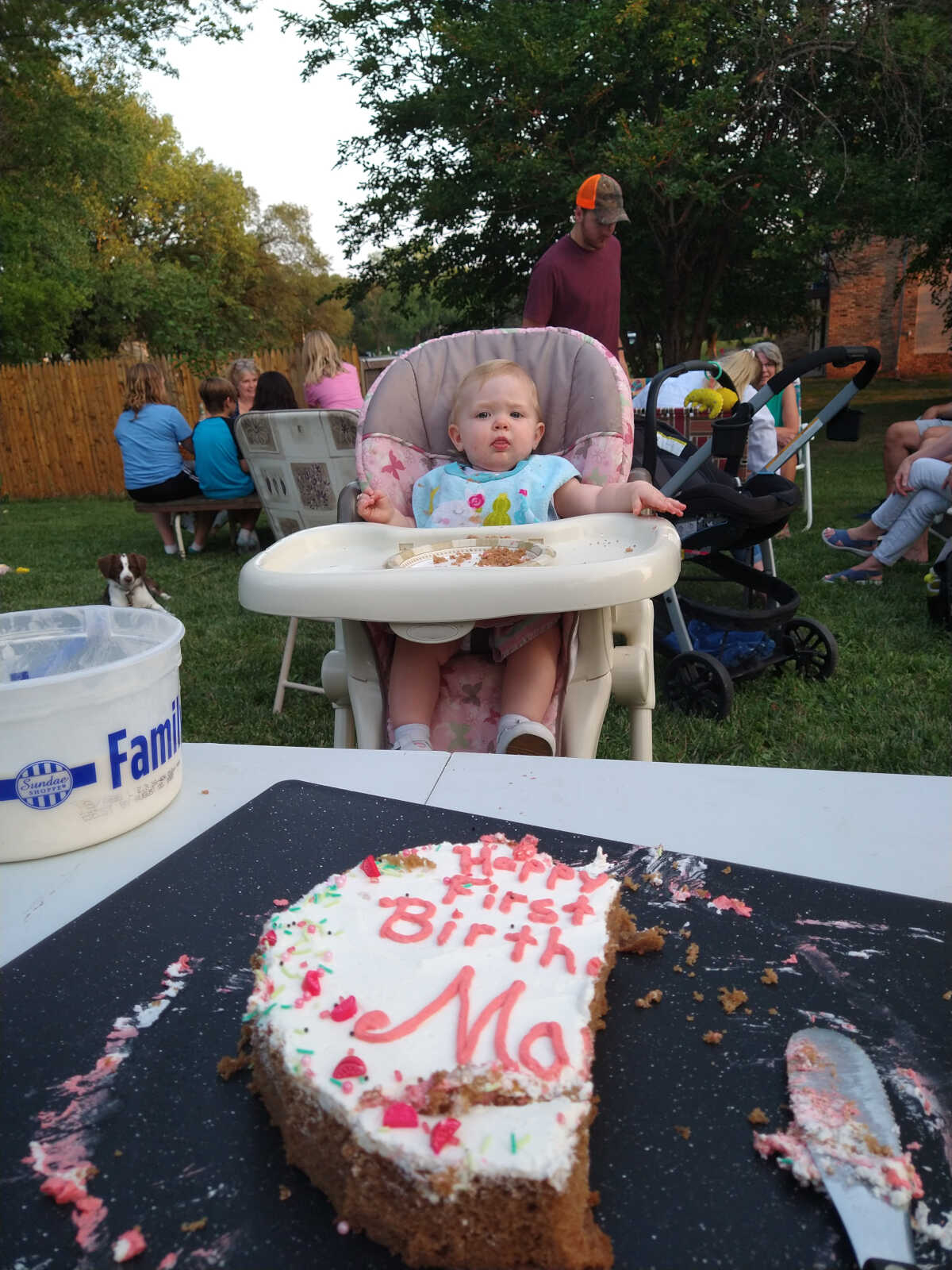 The next day we left for Blue Ox, a bluegrass festival in Eau Claire. It was a really great time. Not only was it Maya’s first music festival, it was also her first camping trip. We were a bit worried that she wouldn’t take well to camping. We were fully prepared to pack up camp and get a hotel room if we needed to, but Maya didn’t have a problem with camping at all! We decided to leave the festival a bit after 10:00pm on Saturday night because we were hosting people again the following evening. 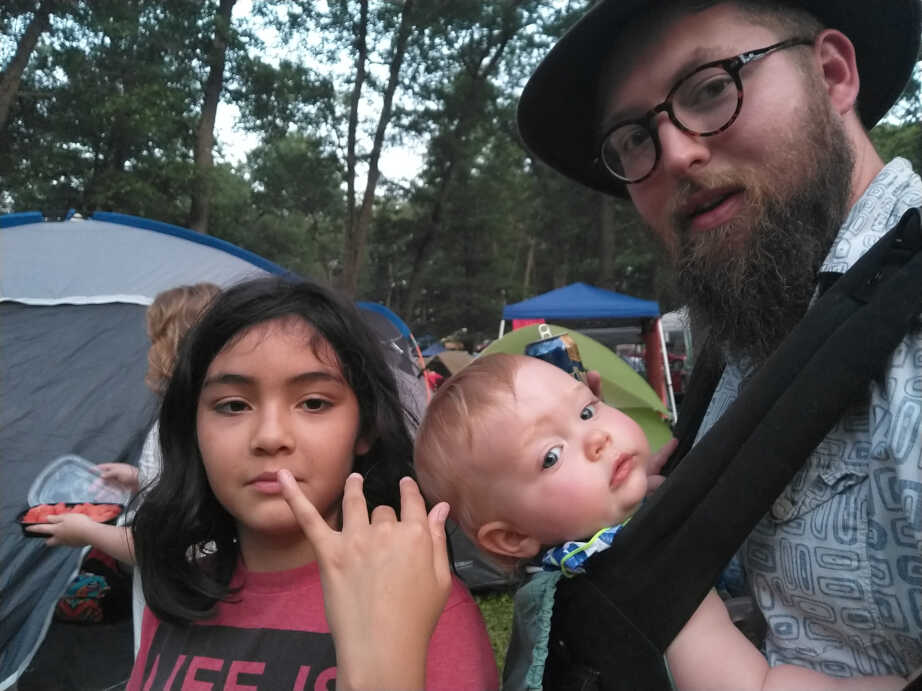 After vigorous showers and getting a good night’s sleep in a bed, we got up and started on cleaning the house. Our good friend Carolyn was hosting her annual (apart from 2020) friendsgiving party at our house this year. It was a great return to form for our friend group, with great food, and great company.

A couple days later Maya attended her first political demonstration. We went down to the Capitol Building to greet and listen to water protectors who walked 250 miles to hold space at the Capitol. They set up tipis on the Capitol lawn and demanded that Minnesota honor its treaties with Native Americans. 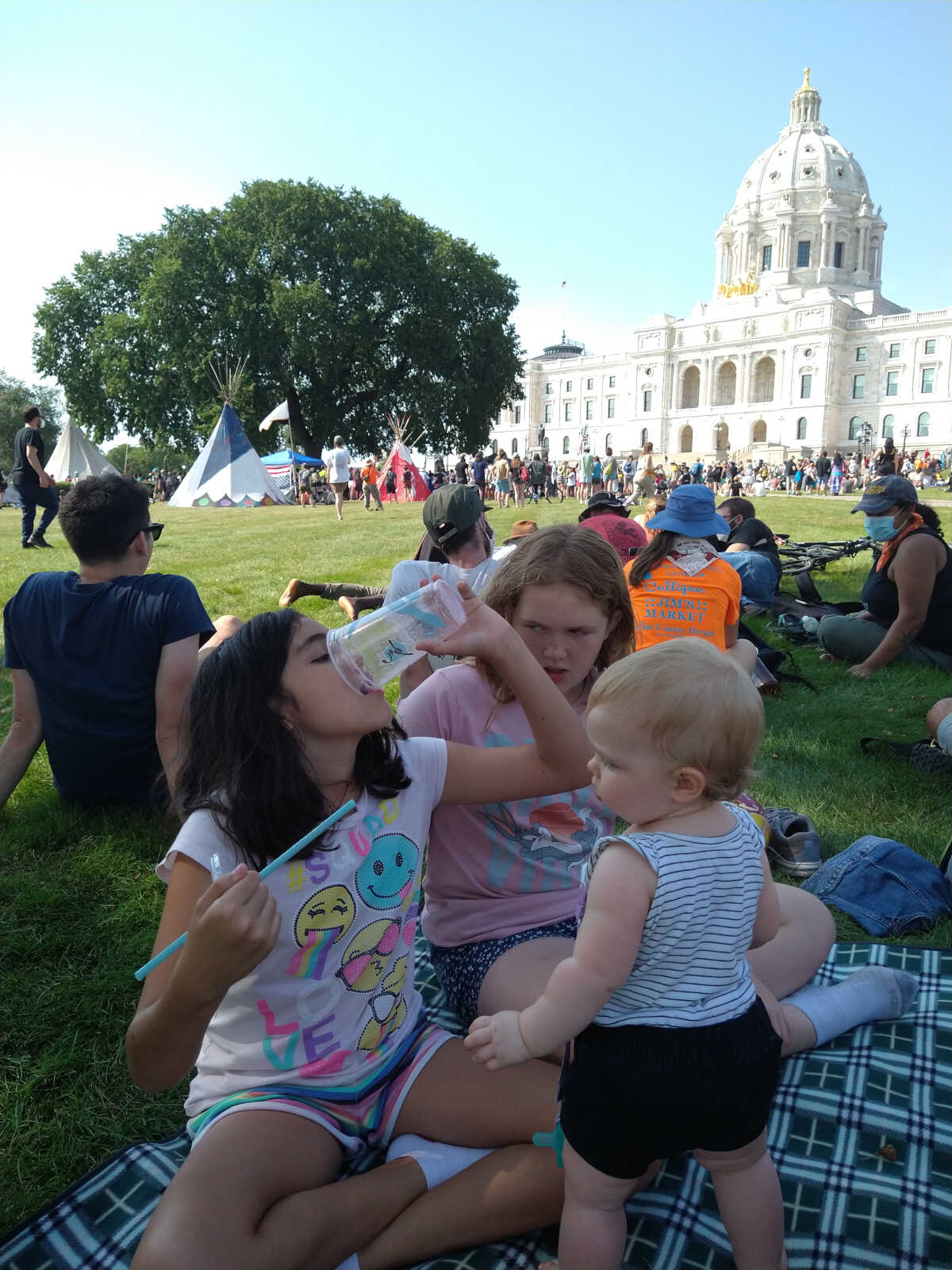 A few days later, 69 protesters were arrested at a demonstration at the Governor's Mansion. A couple of the protesters made a couch surfing request with us after they were released from jail. They were really nice guests, and one of them came with us to West Side Soul (a group of folks who meet at our local ice cream shop to play music and sing together).

September also had its fair share of activity. We had the house stained, and it looks great! We also finally bit the bullet and hired someone to finish the drywall in the basement. At the rate I was working down there it would have been finished after Elena graduated high school! I also started getting the garage organized for winter, which I hadn’t truly done since moving in.

I visited Chicago twice in September. The first time was for my friend Owen’s birthday party. He got an Airbnb for some of his friends (including me) to stay in and party. It was pure bliss getting to spend a whole weekend in a great city, with a bunch of people I love, yet rarely get to see. It was over far too soon. Thanks Owen!

Later in the month I went back to Chicago to attend Riot Fest. It was another crazy, fun, and exhausting weekend. I got to see some of my all time favorite bands like NOFX, New Found Glory, Simple Plan, Motion City Soundtrack, and so many more great groups. I also managed to get out to other parts of the city. I spent a long night at Kingston Mines, I had lunch with my friend Ross, and I went to a pretty cool arcade. I can’t wait to get back to Chicago, who wants to go? 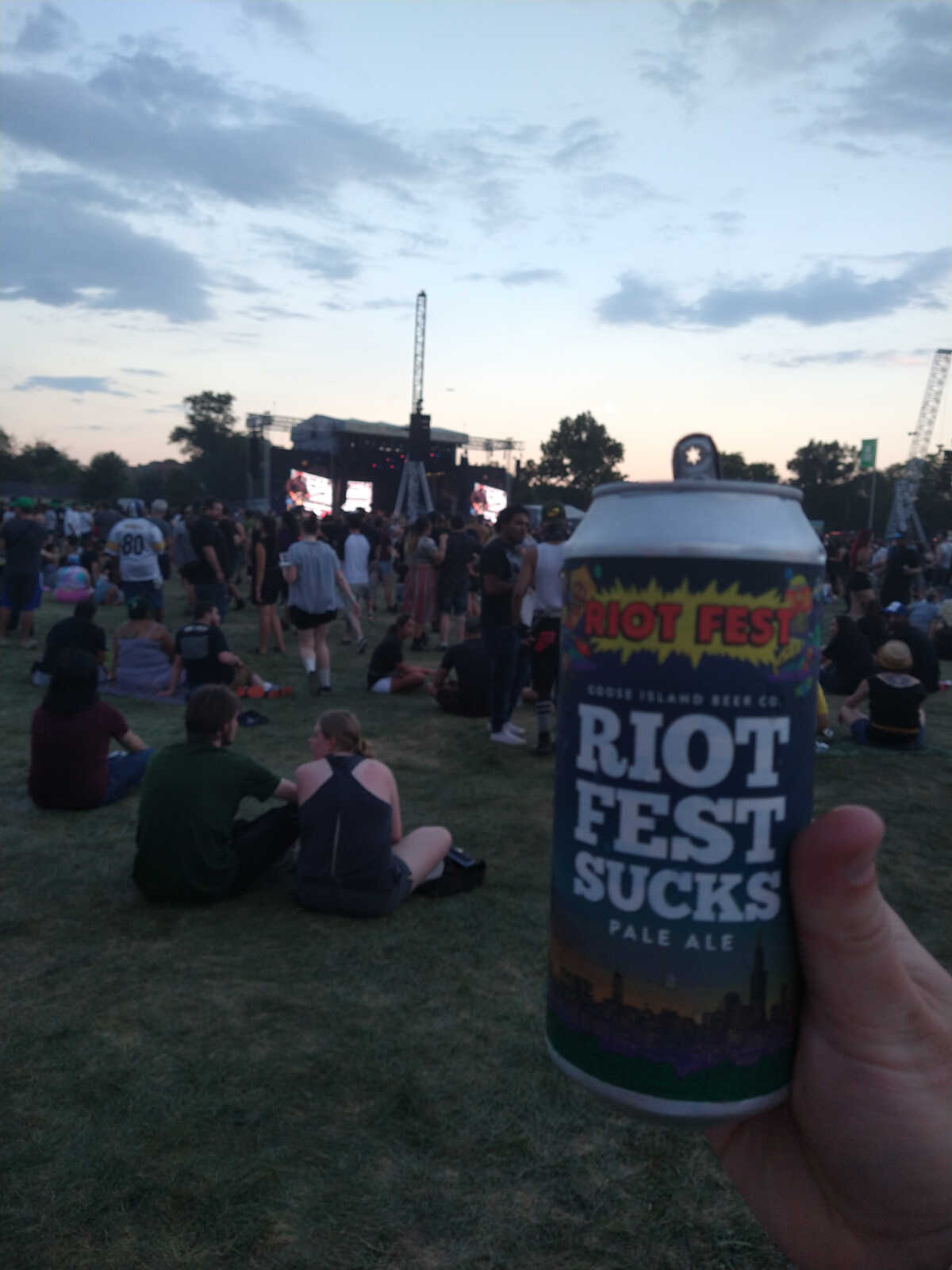 Riot Fest did not, in fact, suck.

All in all, I’d say it was a pretty rad summer. Probably better than last summer at least! I already know how most of the fall went for us, but no spoilers! Tune in next time.