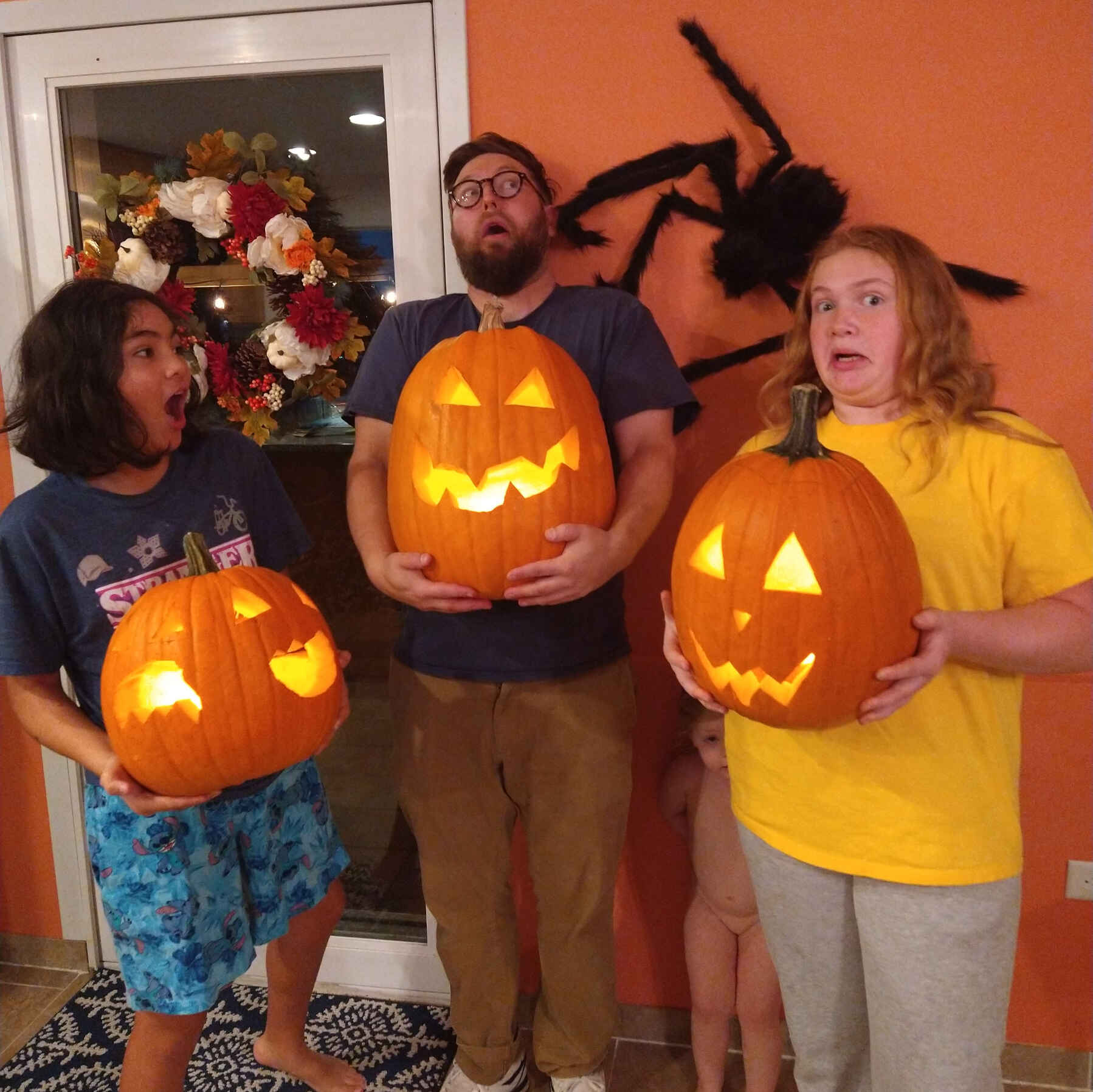 You mean to tell me it's been fall this whole time?!

I use the changing seasons to determine my four blog posts of the year. Yesterday marks the official astronomical start of winter. I think I should start using meteorological seasons for my posts from now on. With how much I've shoveled and how few chocolates are left in the advent calendar, calling it fall feels wrong. Regardless, yesterday was the shortest day of the year which means we're over the hump, huzzah! We made lots of new memories while the days got shorter and as we changed our clocks for the last time. It's crazy to think Maya will grow up in a USA without daylight savings time.

"Daylight savings time? I know Dad, and you used to get Netflix in the mail. Just take your medicine and get some rest. You're talking crazy again."
-Maya someday probably

Here is the obligatory photo gallery for this season.

This fall we got the last harvests from our garden. We had borscht a couple times with cabbage, beets, and potatoes from our garden. We just finished the last of our red cabbage last week and we still have some carrots in the fridge and freezer. Here's hoping next year is as successful or more! 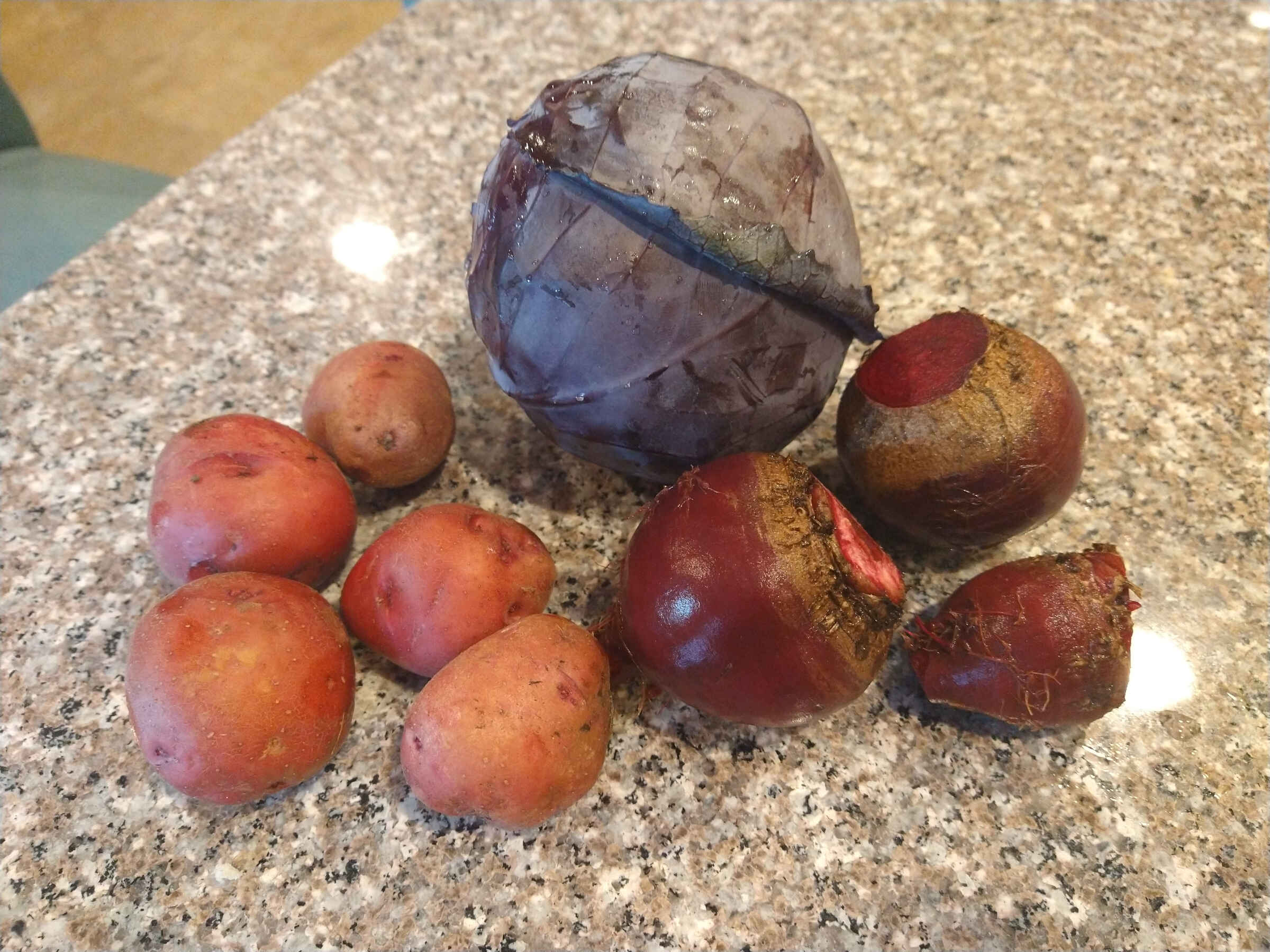 Fresh from the garden and ready for borscht! 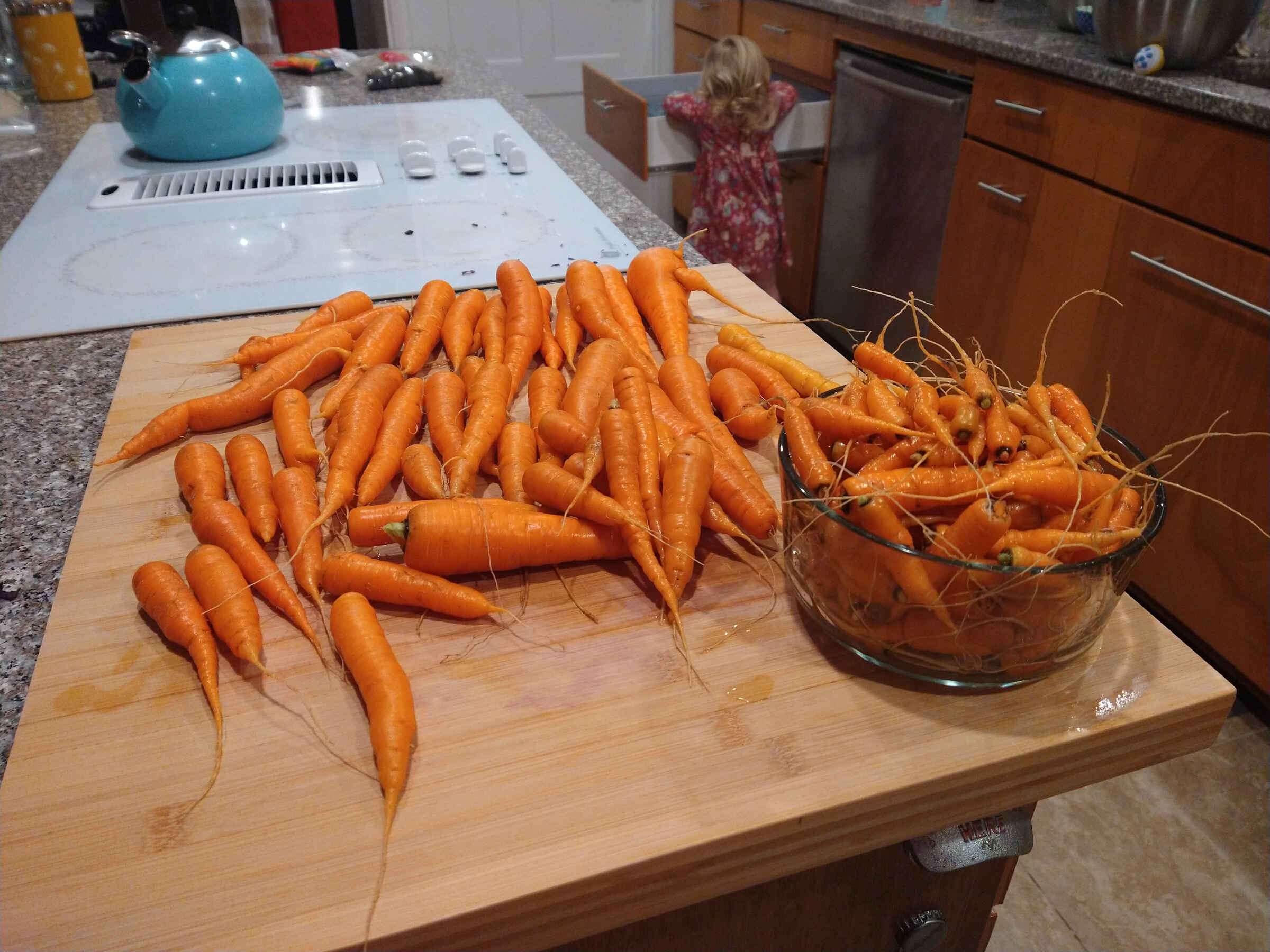 That's a lot of carrots

I fermented my own sauerkraut for the first time this year (with cabbage from our garden of course) and it turned out pretty good. I made sure to have it ready in time for my meat day in October, which is Kielbasa every year. German food was one of the hardest things to give up when I went vegetarian. Many of my once-a-month meat days have been redeemed for German food. During the Oktoberfest season I managed to have a lot of great beers. Yoerg brewing in Saint Paul always imports some really cool stuff from Bavaria. This year was my first time going to Waldmann's Oktoberfest party. It was lots of fun and I had way too much beer and almost too much fun. 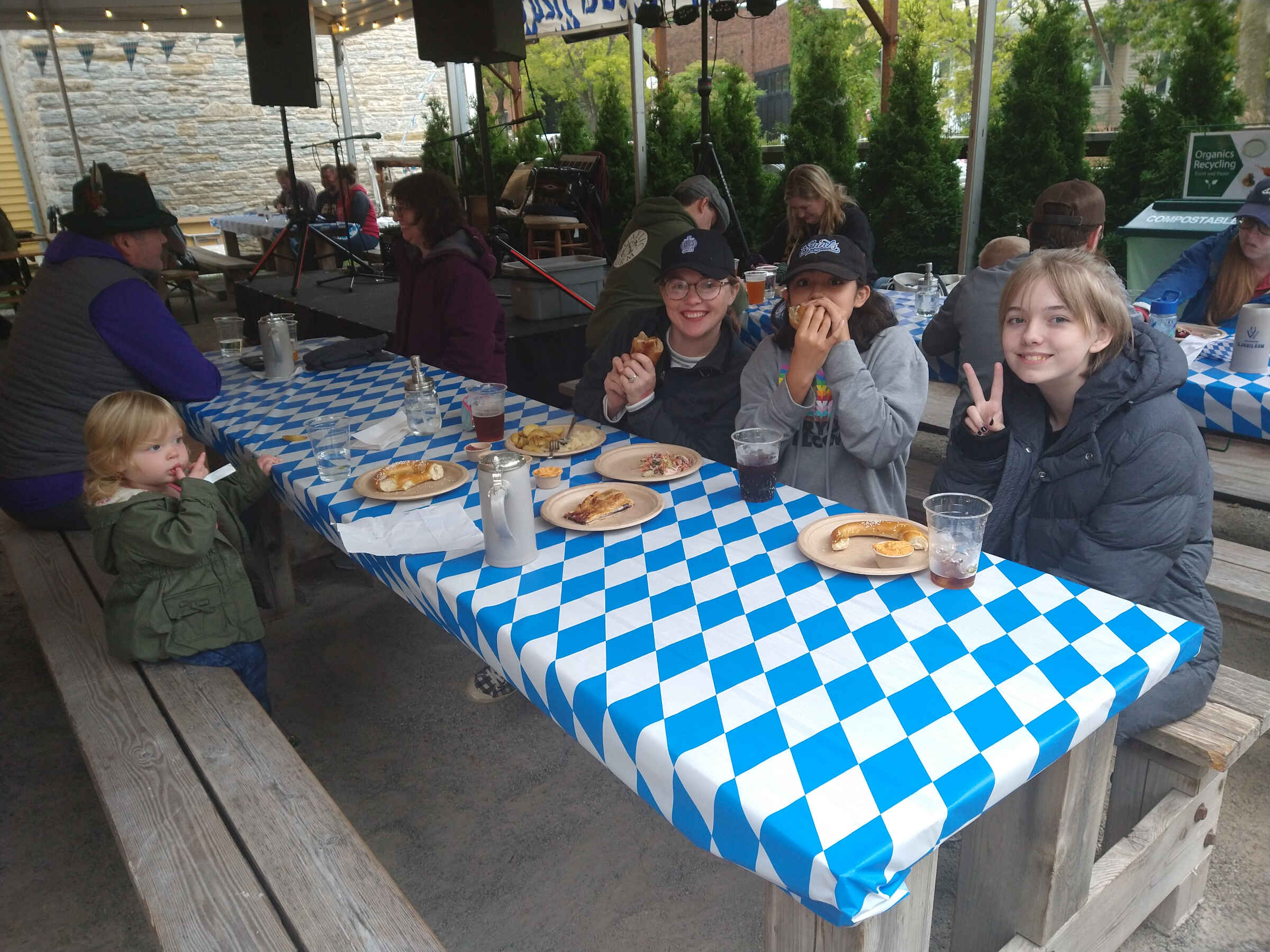 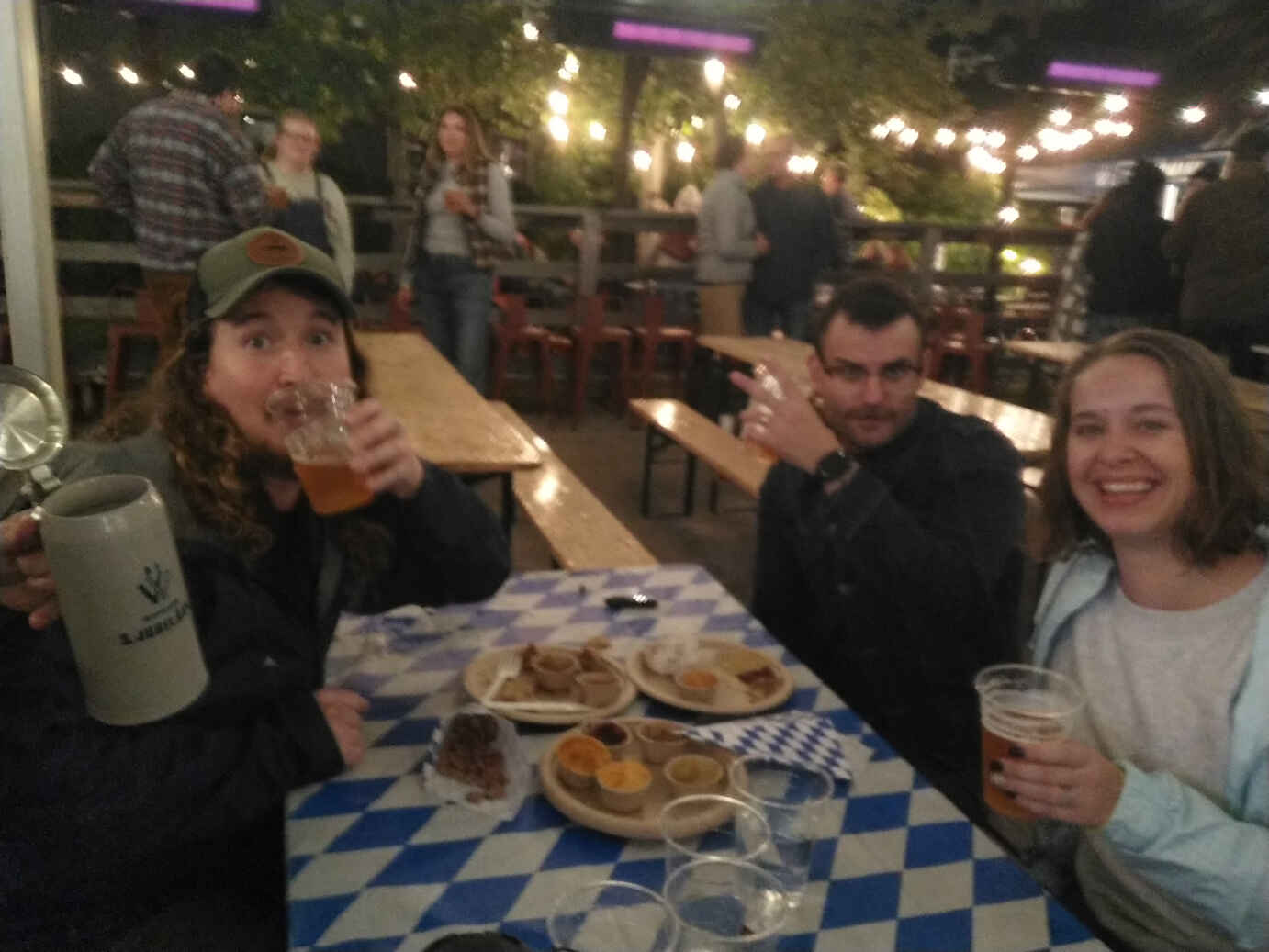 Maya spent most of the fall going to some kind of "school" four days a week. She loves it so much. She's still learning to share, but otherwise she's great with other kids and adults. She has learned so many songs and rhymes and made so many friends. Two of the days are partial separating ECFE, where the parents all go to a separate room for half the class. Two other days I get to leave her for almost two hours and run errands by myself, go on nature walks at Battle Creek Regional Park, or just play video games in the car. A couple times I even took a nap! She doesn't have that class anymore and I miss it dearly. When not at school she loves to read books, play with stickers and playdough, help dad cook, and play with her blocks and baby dolls. We try to bring her to lots of storytime programs at the area libraries. She still loves those storytimes so much. She still gets to play outside a bit, though it takes a lot more prep to go out in the snow. We also got a Children's museum membership, we get a free guest pass each visit so hit me up if you'd like to go sometime. 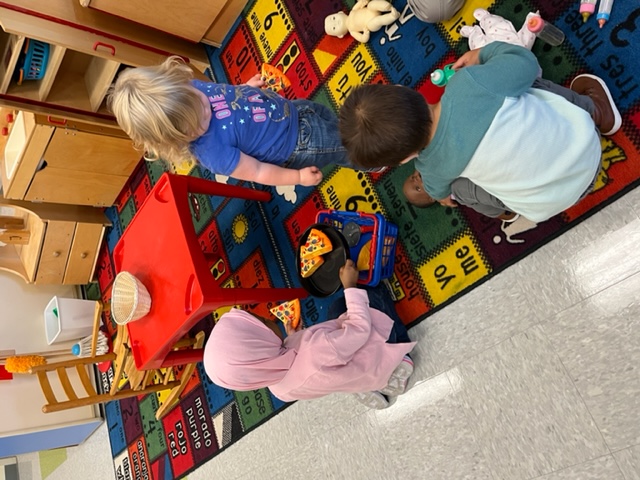 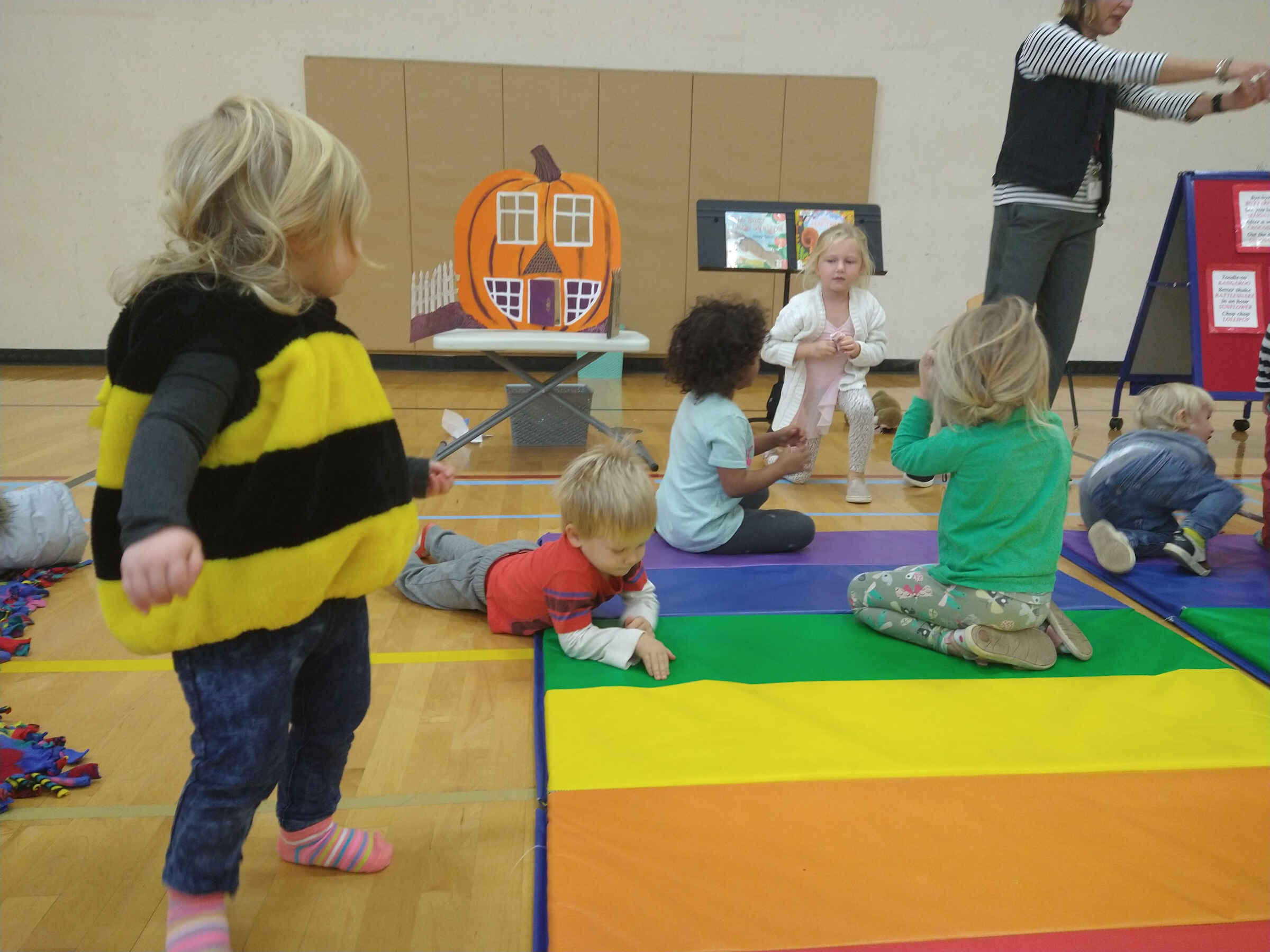 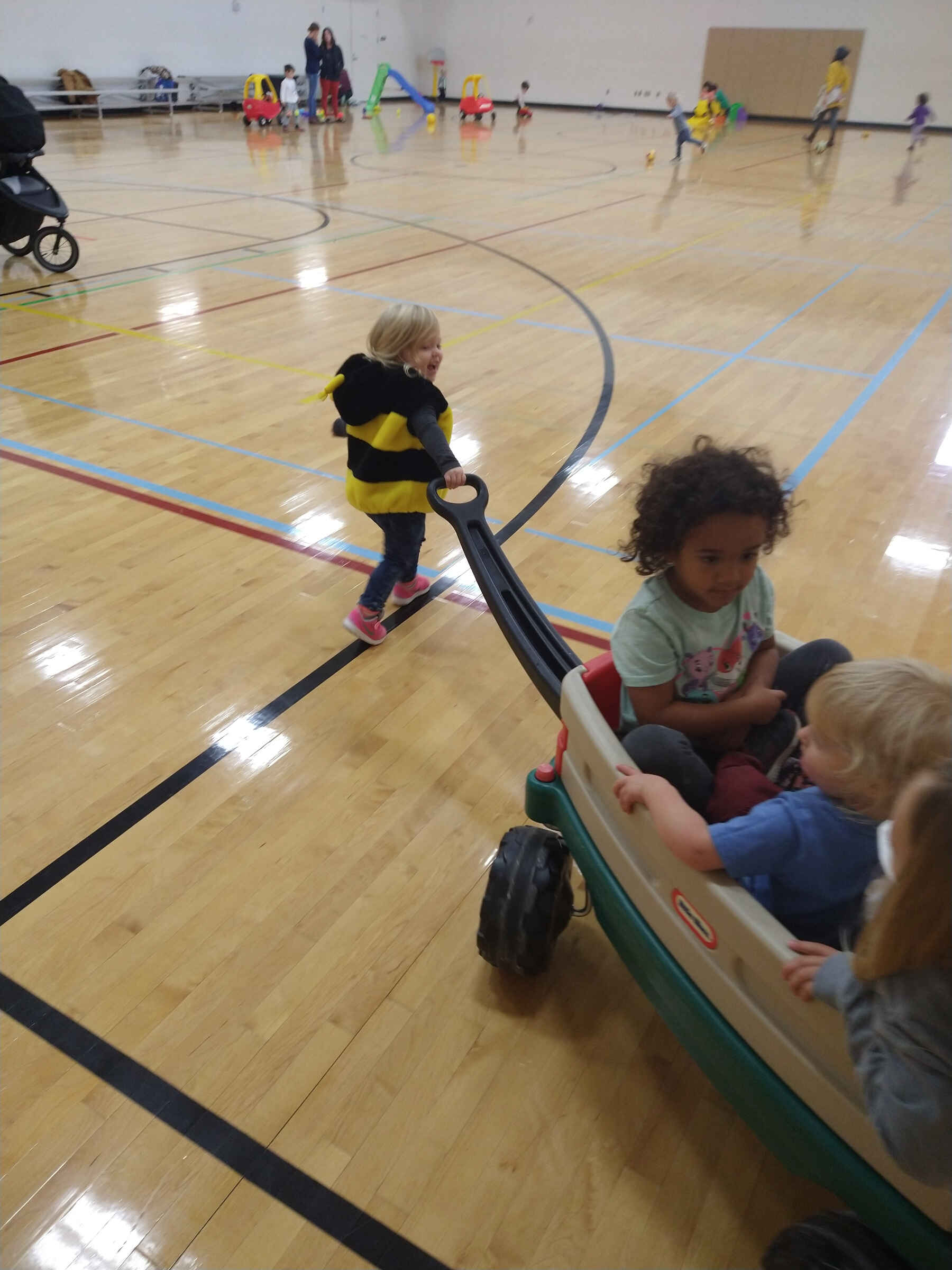 I made sure to prime Maya for Halloween early. This was the first year she was old enough to trick or treat so I wanted her to be ready enough that she wouldn't crack under the pressure of the big day. We read lots of Halloween stories and sang Halloween rhymes. One of her favorite activities is watching storytime videos from the library system in Wake County North Carolina, luckily they have four Halloween storytime videos that she fell in love with. We decorated the house inside and out. We even gave her a practice run at a trunk or treat event. By the time the big day came she was ready. Donning her Elmo costume she confidently belted out "trick or treat!" and "happy Halloween!" I took her out in a wagon for over an hour of trick-or-treating fun. She became so engrossed that it was hard for her to accept that Halloween was over and soon other holidays would come. 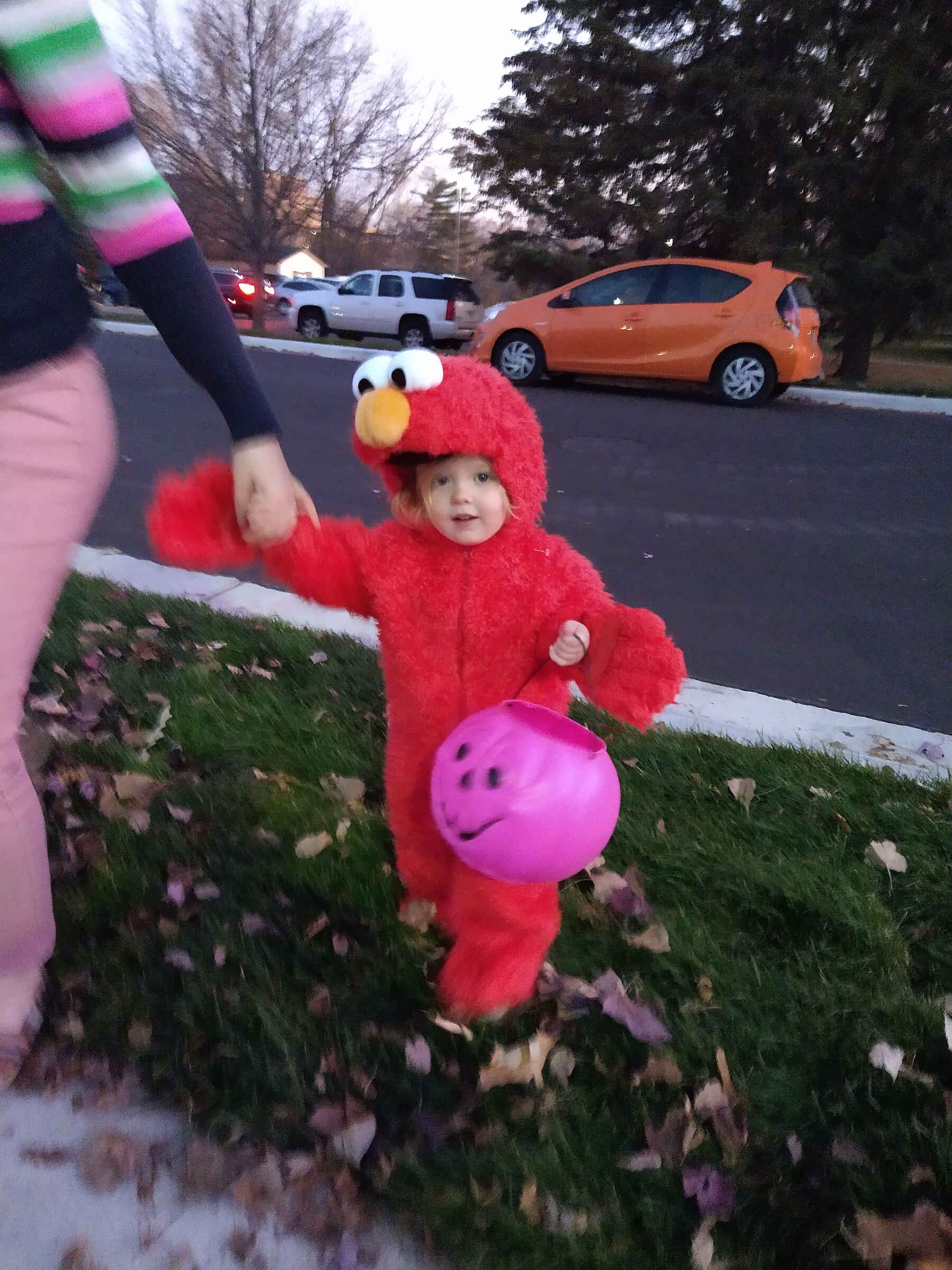 Elena's birthday is super close to Halloween, but she's never wanted to share her party with the holiday until this year. She decided to have a Halloween costume party. I was super excited and got right to work on the decorations. I also made sure to get the basement mostly finished in time for the party. I even got the disco ball up. Our basement is now a super fun hangout spot. The party had a great turnout. Great friends, great costumes, and great memories. A perfect way to celebrate Elena's first birthday as a teenager. 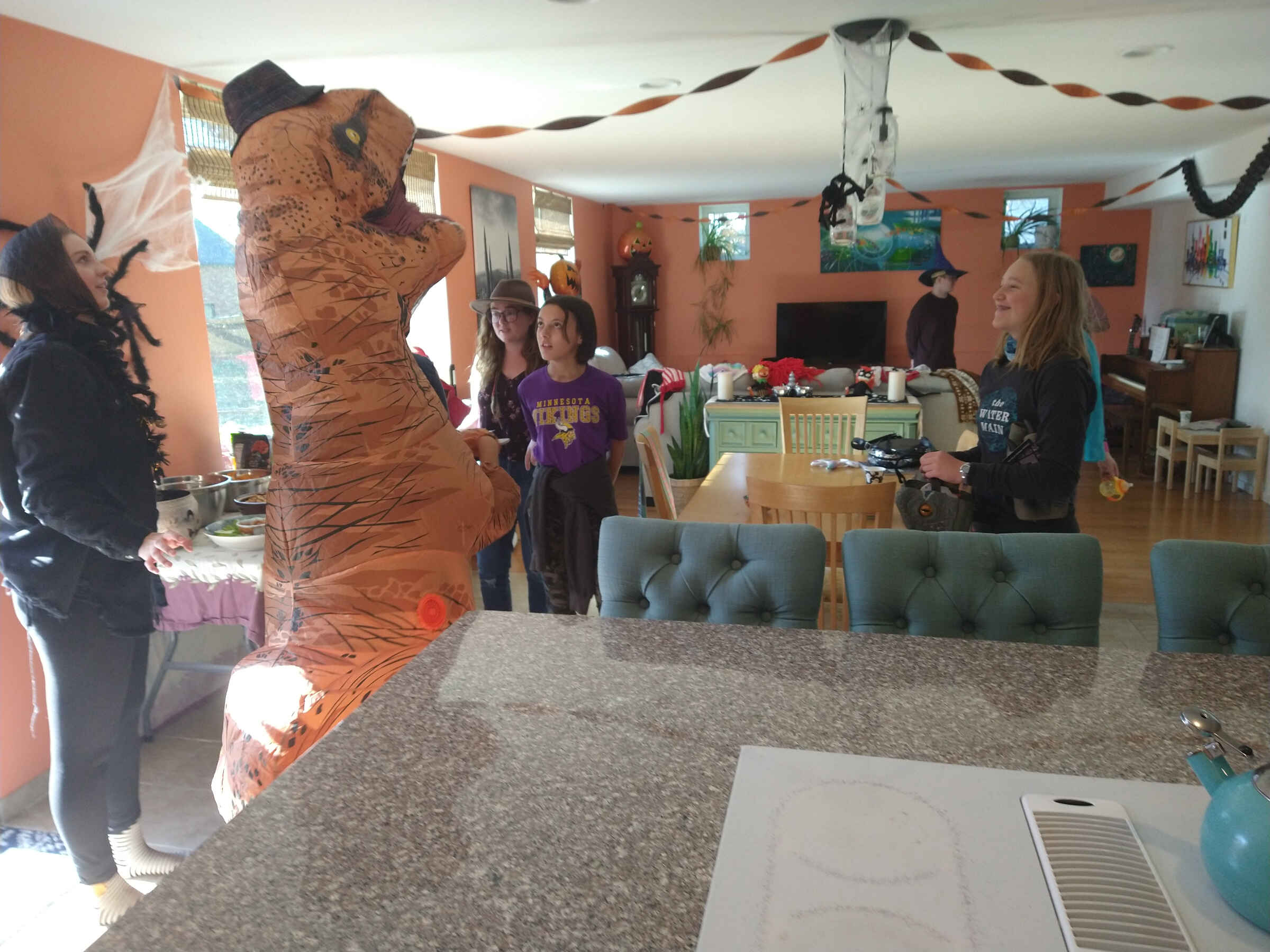 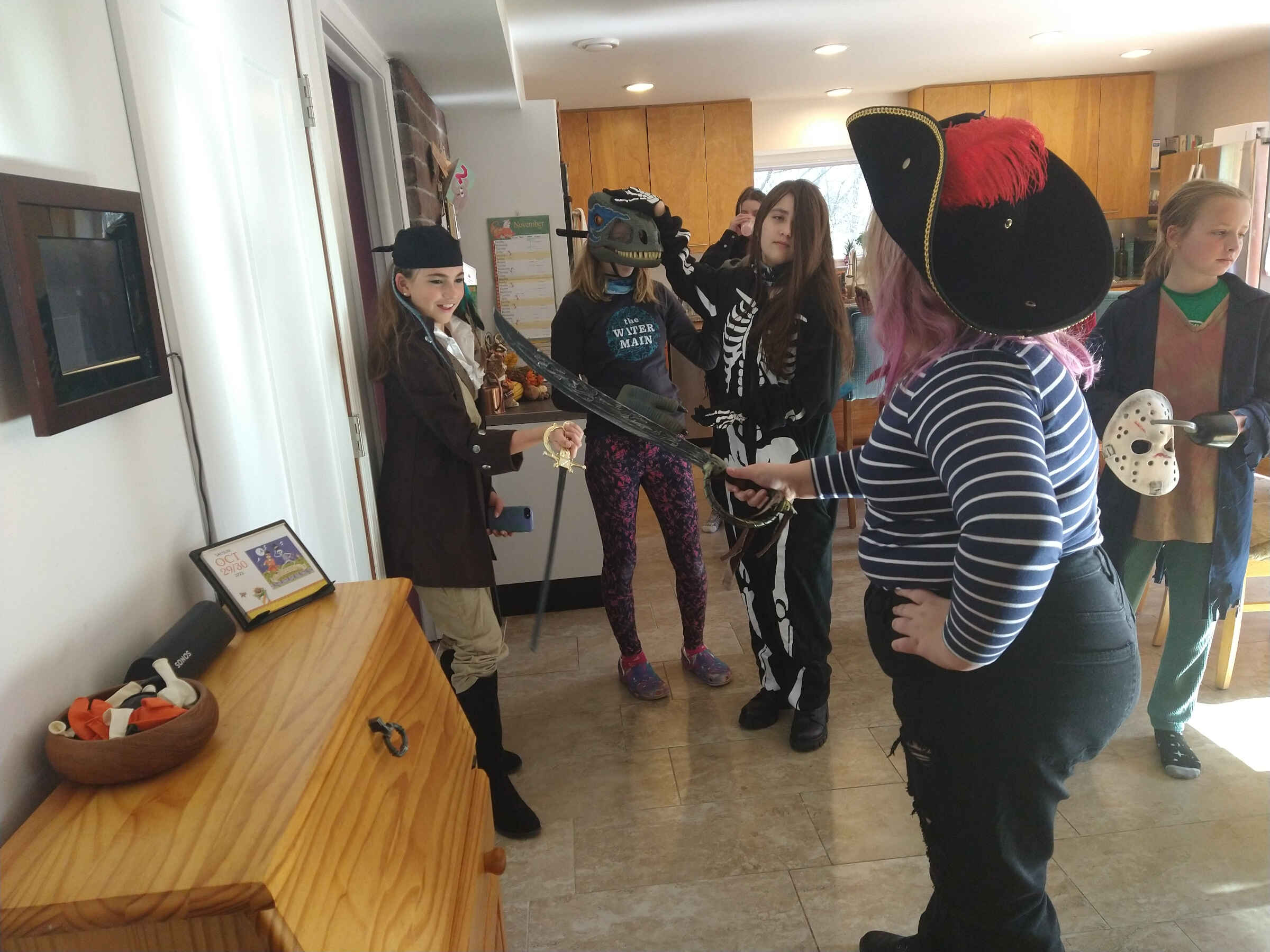 Elena really hit her stride last year, after a rough time switching to a new school during COVID-19. She made a lot of friends last year, and even more this year. She seems to get along with everyone including her teachers. She made it on the A honor roll this term. After tennis ended she started basketball, which just ended. She also joined the Twin Cities' Girls Choir. They had their first concert recently and it was stellar. In addition to switching from band to orchestra this year, Elena also joined the extra curricular string ensemble at her school. She plays the violin. She goes to school an hour early on Thursdays and Fridays to practice with the ensemble. The fall orchestra concert just happened and she had to learn six pieces: three with the 7th grade orchestra and three with Stringsemble. It's been pretty hectic but she's handling it all very well. She had basketball every day after school. On Mondays immediately after basketball she had to go home to change and grab a quick bite before going to choir practice in Minneapolis. She wouldn't get home until just after 8pm. Thursdays and Fridays she goes to school as the sun is just coming up and doesn't get home until just after out goes down. She wakes herself up every day, kicks butt in school, and then kicks butt in her other activities. She's a rockstar. 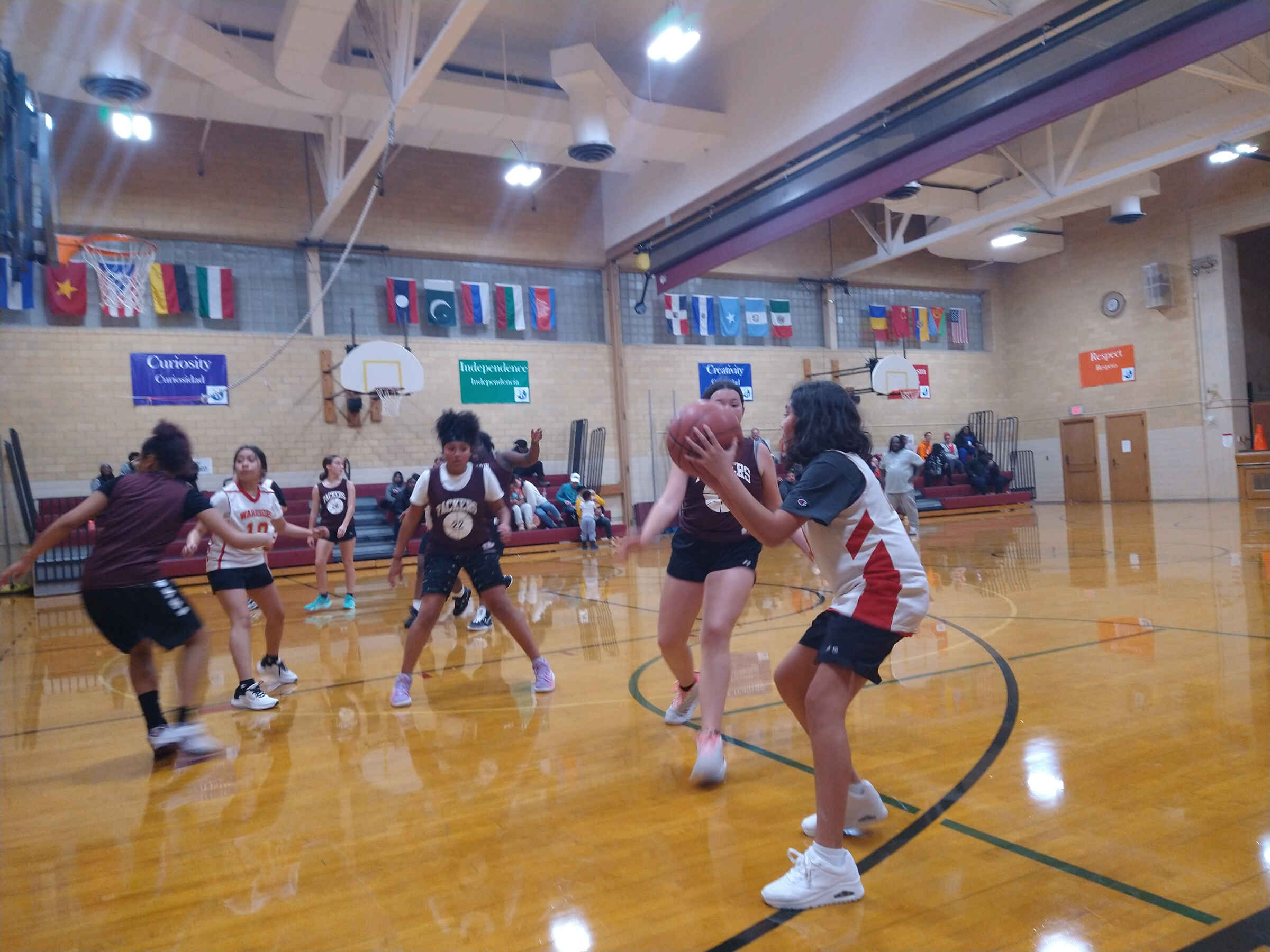 We only took one trip this season, any guesses? It was to a music festival! A bluegrass festival in Tennessee called Cave Fest, named after the caves on the festival grounds. There were two stages. One stage was at the bottom of a valley with people spreading out on the hillside, which served as a great amphitheater. The second stage was inside one of the caves. It was a little cold for us to camp, so we got a nearby hotel room, much to Elena's relief (she doesn't have the outdoorsy gene). It was a fun festival and well worth the trip. Amelia has been working a lot. The hospital has been very short staffed, especially her unit. She still has a regular schedule but has been going in early and staying late a lot. We do see her, surprisingly so. She brings Maya to the library some days, and to school every Monday. Some nights we're still able to eat dinner together. She somehow has managed to join (and participate in!) the Twin Cities Women's Choir. She also exceeded her annual reading goal of 100 books once again. She even sleeps a little bit. We got a new fridge, a sectional and a minivan.

Married with two kids,
I drive the mini van to
our house in the burbs
-a haiku by someone who was once in a punk band

This fall felt like the first time I've been able to reclaim some of my hobbies since Maya was born. Maya's a bit more independent now, I've gotten a lot of the projects done that we wanted done in the new(ish) house, and things are getting back to normal COVIDwise. I've managed to play Magic the Gathering three times this fall! This fall I also completed a childhood dream: completing the Pokedex in Pokemon Crystal. This was the first video game I ever owned as a child and this elusive goal seemed impossible until very recently. I also attended my first midnight release for a video game: Pokemon Violet. It was so much fun, I was smiling ear to ear the whole time, even though I was literally just waiting in a checkout line. It was a dumb little experience that I finally got to check off my bucket list. This is the first Pokemon game I've ever played the day it released and it felt like such a special moment. Don't laugh at me. I drive a mini van and have a peanut allergy and an astigmatism, you'd be punching down.

And now for a rundown of some miscellaneous notable fun. We went out bowling at Ran-Ham. Maya loved her first time bowling with the ramp. Maya went to her first Twins game. We went to some chilly saints games too. My parents had us over for a pizza party. We went to Afton Apple Orchard. Amelia, Maya and I had a nice night out to see a jazz trio at KJ's hideaway. A night out at Ran-Ham Maya watching Grandpa toss the pizza dough in the air

Maya and I have been sick a lot since it's gotten really cold. We were sick with one bug after another for more than a month straight. I wanted to get her as invested in the traditions and rituals of Thanksgiving and Christmas as we had done with Halloween. It's been hard with how much our immune systems have been strained, but we're managing. 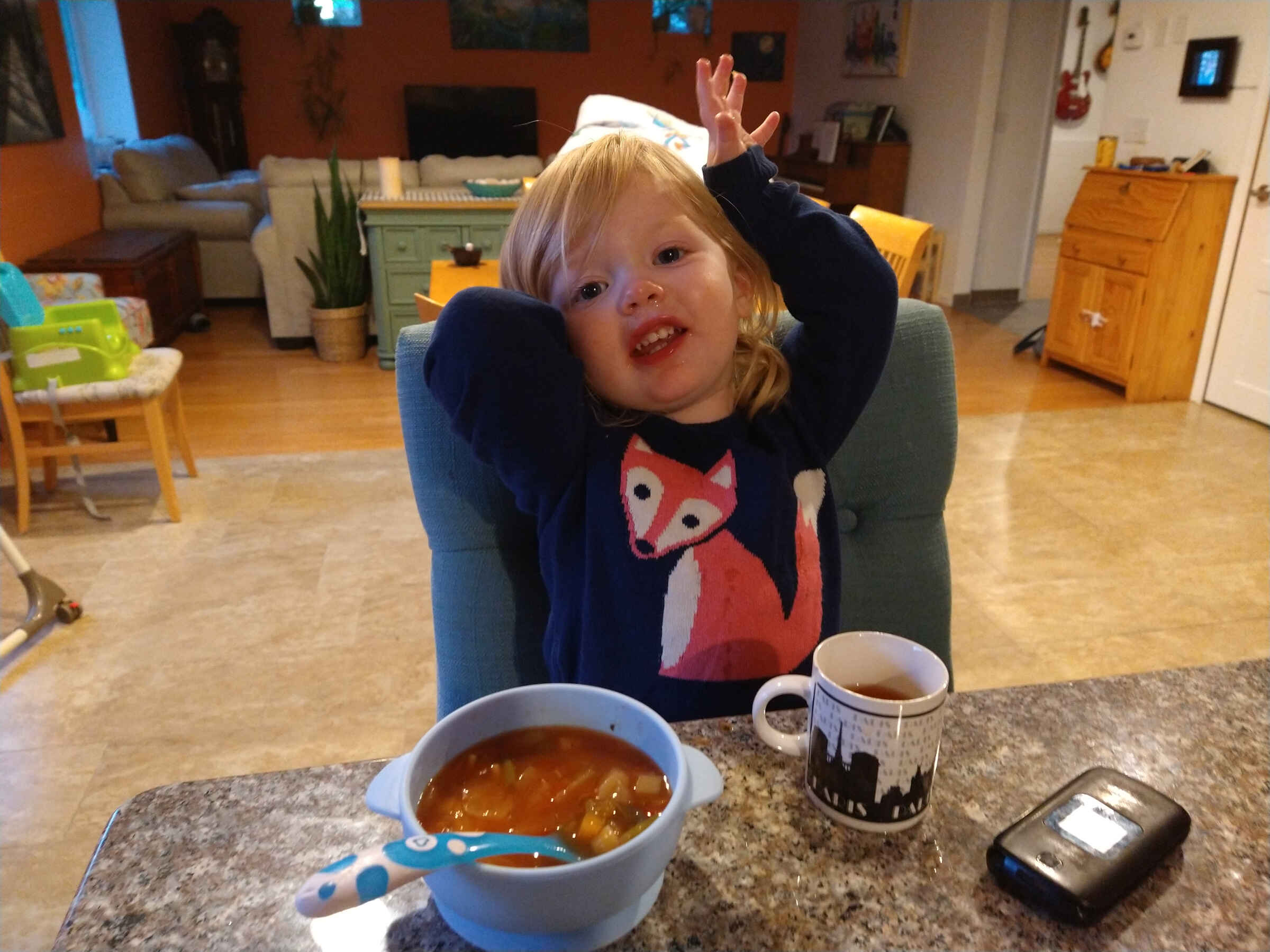 Maya is much better at coping with sickness than I am Maya had so much fun playing with her cousins

Since Thanksgiving we've read lots of books about Christmas. Maya has been trying to learn the words to Jingle Bells. We've done a lot of decorating. With how sick I've been we skipped Christmas cookies this year. Maya knows all about Santa Claus and has even gotten to meet him a couple times. She's a big fan. Maya was so excited to see the big man himself

We've still got one last road trip in us for the year. We left today and will be ringing in the New Year in Santa Fe, NM. My parents got a house down there for five weeks and we'll be joining them for part of their stay. We were planning to leave tomorrow but this weather just keeps looking worse and worse so we want to get the heck out of dodge. Good luck to everyone who's staying in the midwest.

It's been a good wint... I mean fall! It's been a good fall and I'm excited to see what winter brings. I'm optimistically anticipating a lot of nothing. That would be nice. So far we don't have any trips planned until Spring Break. Merry Christmas and Happy New Year y'all.